The fan shell | Biology of the fibre beard

The fan shell (Pinna nobilis L.), which is only found in the Mediterranean, has fascinated naturalists since ancient times. Even Aristotle and Pliny the Elder described its way of life and its companion, the Pinna guard – a type of crab. Countless remains of Pinna shells have been found in excavations around the Mediterranean, which suggests that the fan shell can be counted as part of the usual Mediterranean diet. An adult fan shell can yield up to one kilo of mussel meat. It is, however, unknown since when their fibrous beard, the byssus, has been used as a textile material. The oldest textual sources date back to the 2nd century AD, while the oldest material finding was identified the 4th century AD. 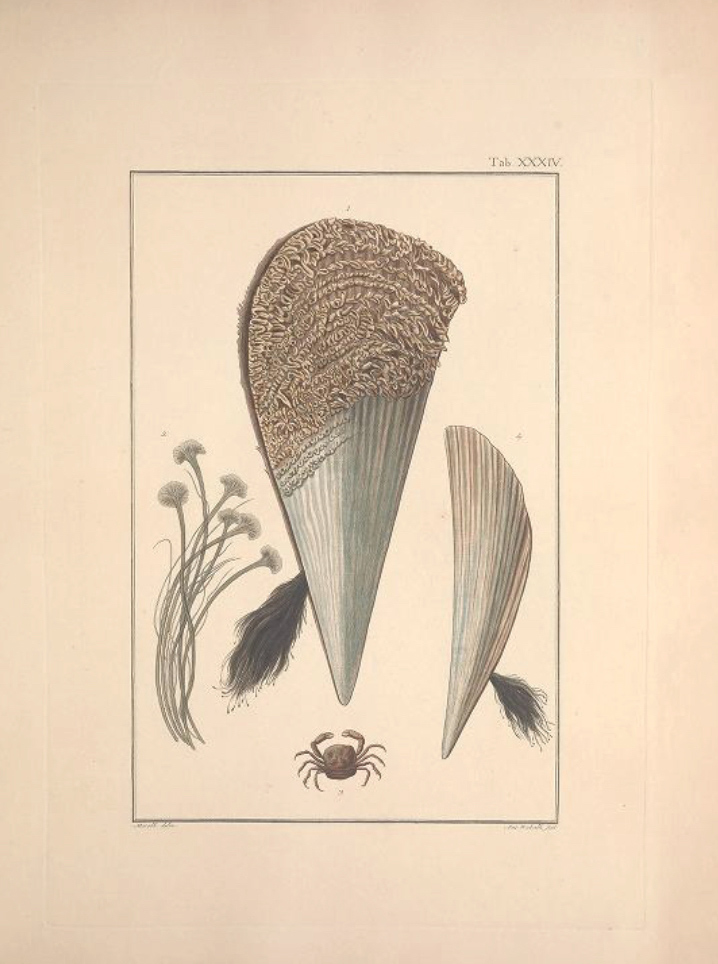 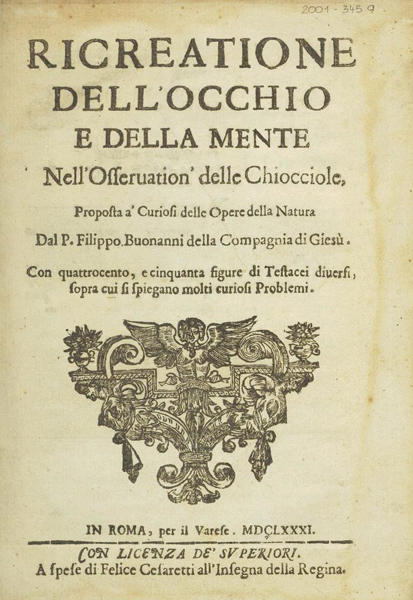 The first book devoted exclusively to shells and snails was published in 1681: Ricreatione dell’occhio e della mente nell’osservation’ delle chiocciole (in English: Recreation of eye and mind in observing snails) by Filippo Buonanni (1638-1725). It is one of the first natural science books written in a modern language – in this case Italian. Among the copper engravings, there are two fan shells with fibre beards. Buonanni knew the use of the fibrous beard as a textile material, for which he employs the term bisso marino; i.e., marine byssus. He contrasts it with bisso Terrestre; i.e., byssus ‘from the land’, which is made of linen or cotton (see Linguistic aspects → Byssus and byssus). The first studies of the byssus of the Pinna nobilis date back to the early 18th century.

A short video demonstrates the rescue operation of a large population of Pinna nobilis near the island of Giglio, in Tuscany. After the Costa Concordia shipwrecked in 2013, marine biologists from Rome’s Sapienza University dug up the mussels lying under the shipwreck and reintroduced them to the sandy ground a few hundred metres away. It is not known whether these mussels survived.

Processed sea silk can hardly be distinguished from mulberry silk by eye. However, thanks to the clearly elliptical cross-section of the byssus fibres, which does not occur in any other natural fibre, it can be easily detected under the transmitted light microscope. Images taken with a scanning electron microscope show the surface, while physico-chemical investigations reveal other properties of the byssus fibre of Pinna nobilis. In 2002 and 2010, research on purified byssus fibres was carried out at EMPA St.Gallen. Firstly, this included dyeing experiments with true purple, and experiments with chemical dyes were also conducted.

Since the 1980s, byssus fibres have been researched with the aim of using them in the wet area in medicine, for instance, in dentistry. However, this research is never done with the byssus of Pinna nobilis, but with the byssus of the blue mussel (Mytilus edulis or Mytilus galloprovincialis). 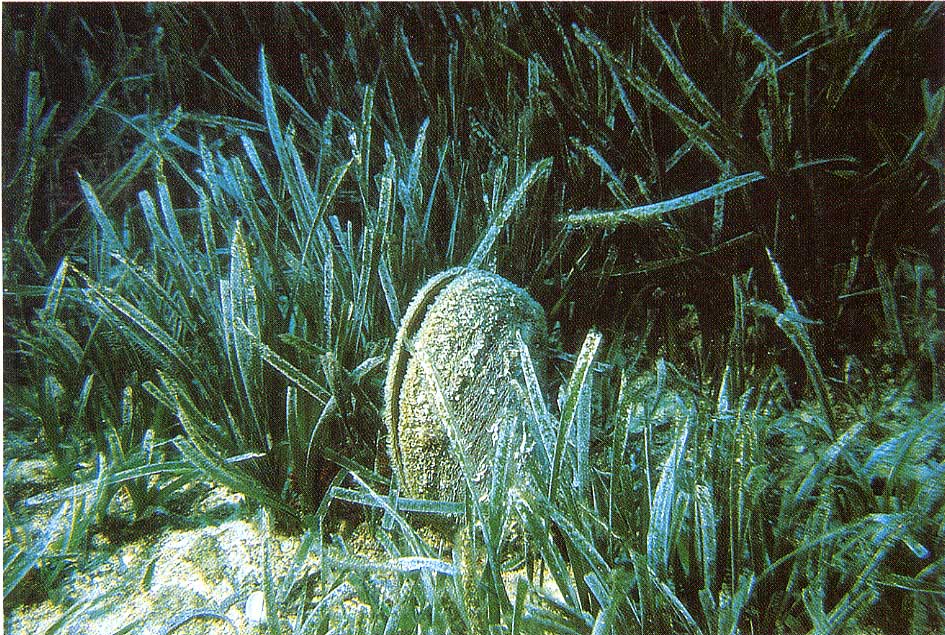 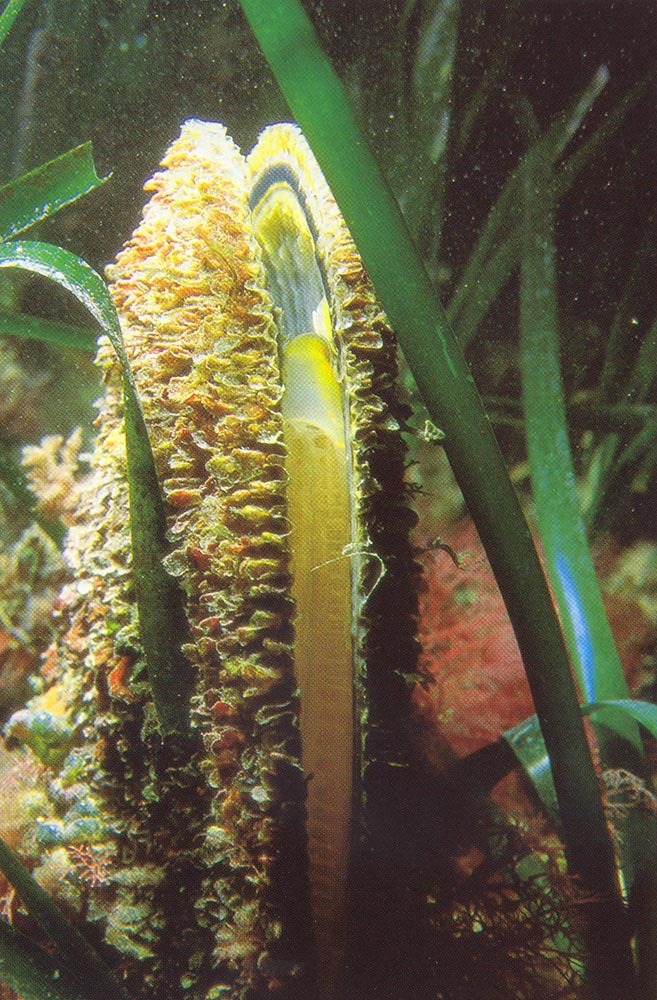 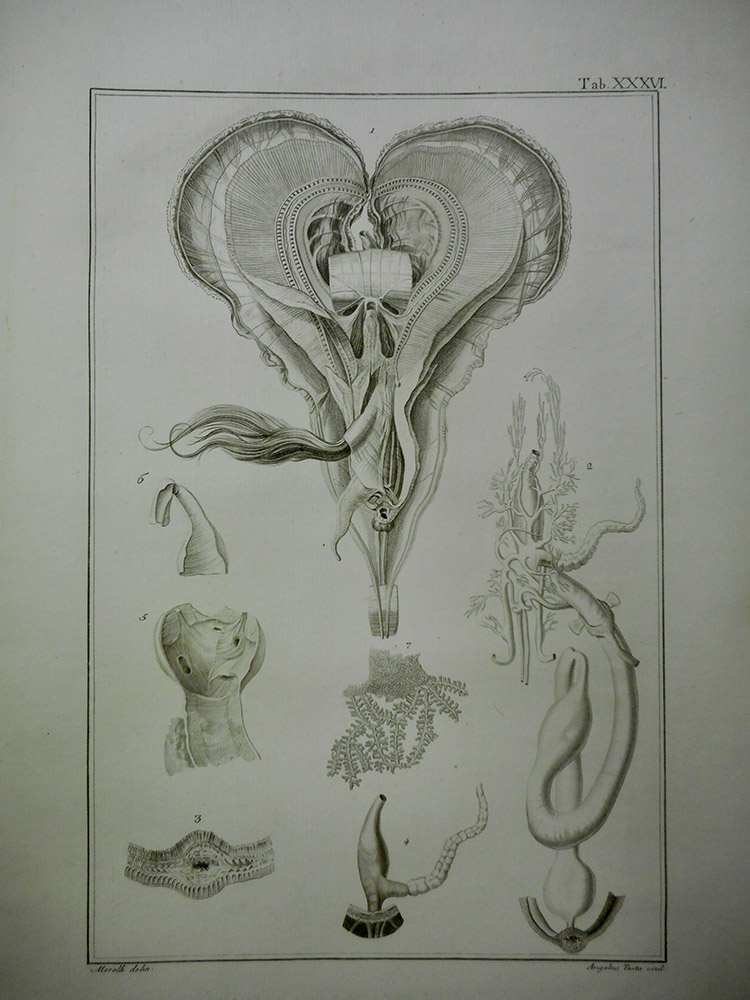 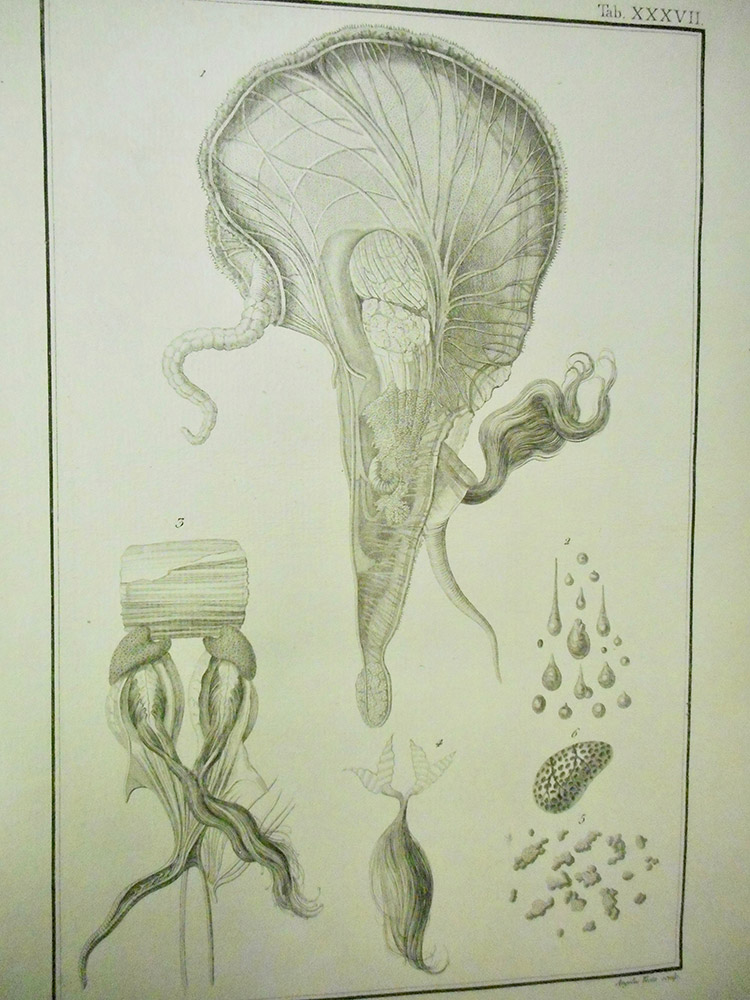 Anatomy of the Pinna nobilis, Czihak-Dierl 1961

The fan shell (Pinna nobilis L.) is the largest bivalve mollusc living in the Mediterranean Sea; it is endemic there. Its habitat is seagrass meadows of the species Posidonia oceanica (L.) or Cymodocea nodosa (Ucria). The mussel prefers more or less enclosed, sheltered bays with shallow water depths of up to 40 m maximum. The most important factors characterising the habitat of Pinna nobilis include good light conditions, basically clean water, low seasonal fluctuations in salinity (3.4 to 4 %), moderate temperatures (7 to 28°C) and a normally steady, slow currents with sufficient nutrients.

The sedentary fan shell feeds on plankton; and to do so, it filters around 6 litres of water every hour. As a hermaphrodite, it produces female and male germ cells, which it releases alternately into the water between June and August. After fertilisation, free-swimming larvae develop and sink to the bottom after only a few days, as soon as they have formed a thin calcareous shell. Now the mussel forms the first byssus threads, grows firmly attached and reaches a size of 10 to 15 cm in the first year already; fully grown, the mussels can grow up to 120 cm and live for over 50 years.

Still in the 18th century, dense populations are attested: “da wohnen die zahlreichsten Colonien und Familien derselben, welche … gleichsam unterirdische Städte und Dörfer ausmachen, darinnen die ältesten Stammväter wie Thürme hervorragen“ (Chemnitz 1777), (in English: there dwell the most numerous colonies and families of the same, which … constitute, as it were, subterranean cities and villages, in which the oldest progenitors protrude like towers). Since the middle of the 20th century, the populations have declined. Reasons include, on the one hand, destruction by trawling as well as anchoring and overexploitation by recreational divers. On the other hand, the seagrass beds, the habitat of the Pinna, are threatened by over-fertilisation and by the spread of the so-called ‘killer algae’ Caulerpa taxifolia (Vahl). In 1992, the Pinna nobilis was placed under protection in the European Union (EU) and in Croatia; this was renewed in 2006 (see pdf eur_lex). In 2000, populations varied from one animal to 30 animals per 100 m2. Despite their protected status, many populations are still threatened since the protection of the mussel is not implemented or not respected. “P. nobilis is still commercially exploited and served in Greek fish restaurants. In addition, poaching by recreational or professional fishermen and divers for personal consumption or collection of its shell is quite significant and appears to be a major threat to the conservation of the species.” (Katsanevakis et al. 2011) Only a few years ago, the meat of the Pinna nobilis was also available – illegally – in certain southern Italian restaurants.

A new threat, much more massive in its scale and impact, was first discovered on the Spanish Mediterranean coast in 2016: a mass die-off of the fan shell, which has since reached the waters off France, Italy and Greece. The cause is now known: A parasite called Haplosporidium pinnae, which lodges in the animal’s digestive gland, multiplies there and decomposes the tissue. The mussel starves to death (Darriba 2017, Catanese et al. in press, Panarese et al. 2019, Katsanevakis et al. 2019 (pdf), Lopez-Sanmartín et al. 2019 (pdf), Tsirintanis et al 2019 (pdf), Garcia March et al. 2020 (pdf).

Biology of the fibre beard (byssus)

The fibre beard (zoological term: Byssus) is a tuft of very fine, tear-resistant fibres formed by the byssus gland located in the foot of the mussel. The surface is smooth, with very fine longitudinal grooves, and the diameter is comparable to other animal and plant fibres. At the moment of fibre formation, the movable foot is about 9 cm long and forms a channel through which the protein secretion formed in the byssus gland flows. With the tip of the foot, the secretion is applied to a suitable substrate – roots of seaweed, sand and stones. In contact with the water, the secretion hardens and forms the byssus fibre. In contrast to other bivalves, such as the blue mussel (Mytilus edulis), the byssus filaments of the fan shell do not have adhesive platelets at their ends, but rather, fan-shaped adhesion points. 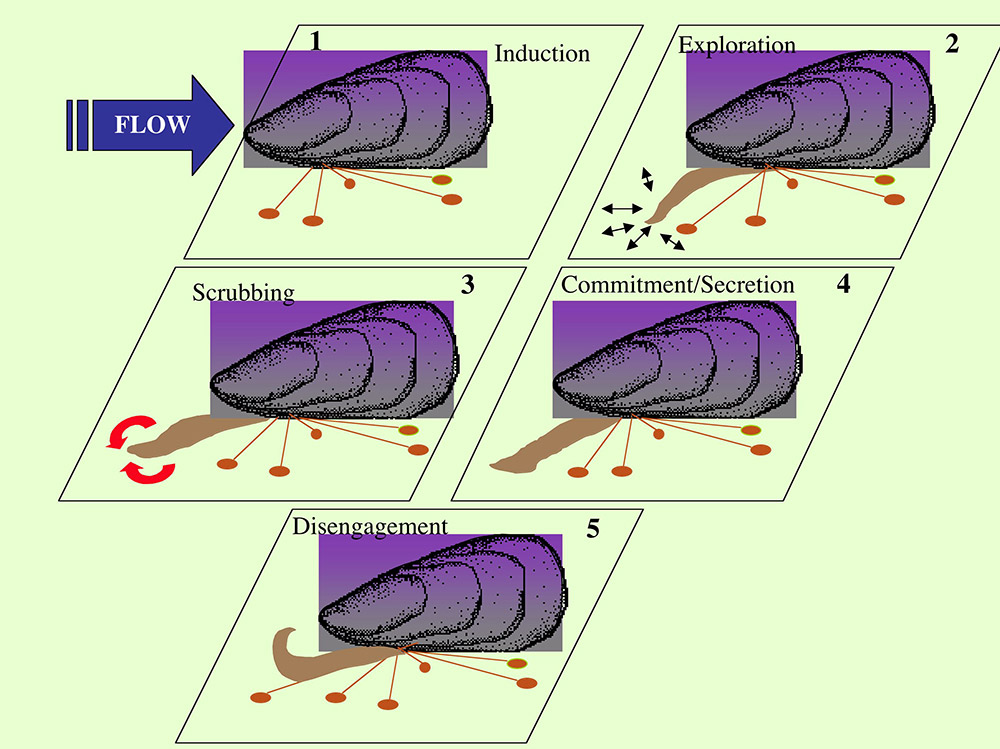 Scheme of byssus production of the blue mussel (Waite 1992) 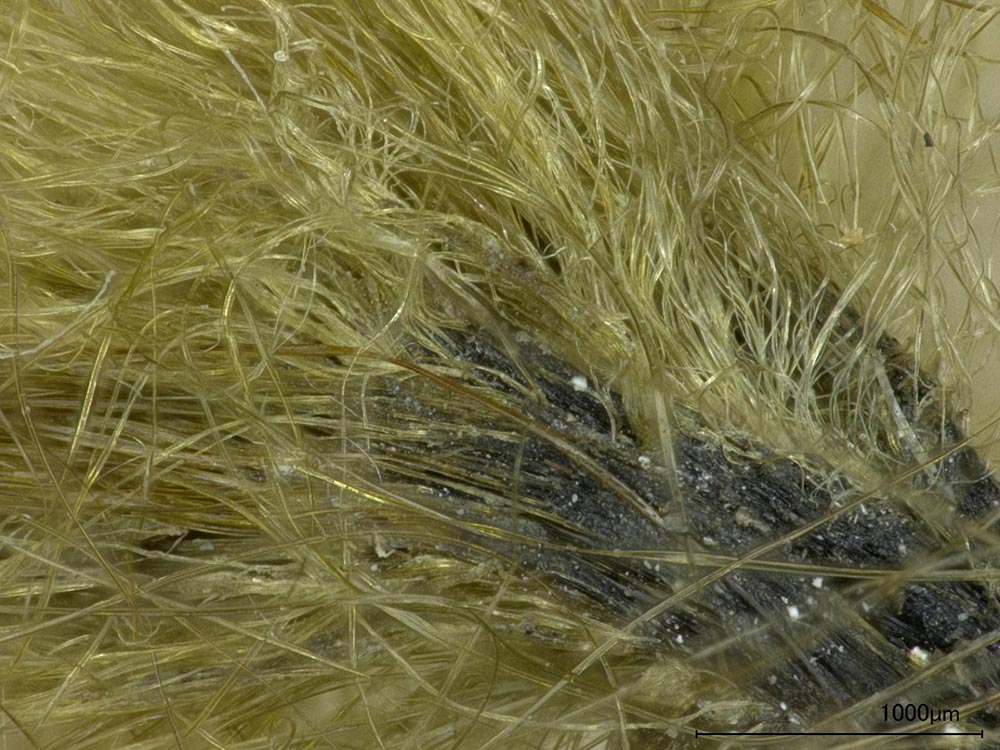 Foot of the fan shell (dark) with emerging byssus fibres

The byssus fibre of Pinna nobilis is composed of organic material, mainly proteins from the collagen group. The hardened fibre cannot be dissolved by water, enzymes or organic solvents. It is combustible – contrary to another circulating legend: “Some other properties of byssus described in popular literature, like its being fireproof appear however to be only legendary; in fact, its threads glow in red and burn away like hair.” (Jaworski 2010). This legend of incombustibility is presumably based on the fact, that in earlier times, asbestos was also called byssus. We learn this in a mineralogy book from the 18th century: „Wir haben eine Erdichtung, dass die Alten sich vom faserigen Asbest Kleider gemacht, und den Asbest Byssus genennet haben; allein es ist dies unglaublich“ (Cronstedt 1770), (in English: We have a tale that the ancients made clothes from fibrous asbestos, and called the asbestos byssus; but this is incredible).

Images of the byssus fibre with a scanning electron microscope SEM show an almost smooth surface, without scales, but with fine longitudinal grooves and sometimes with crumbly areas. 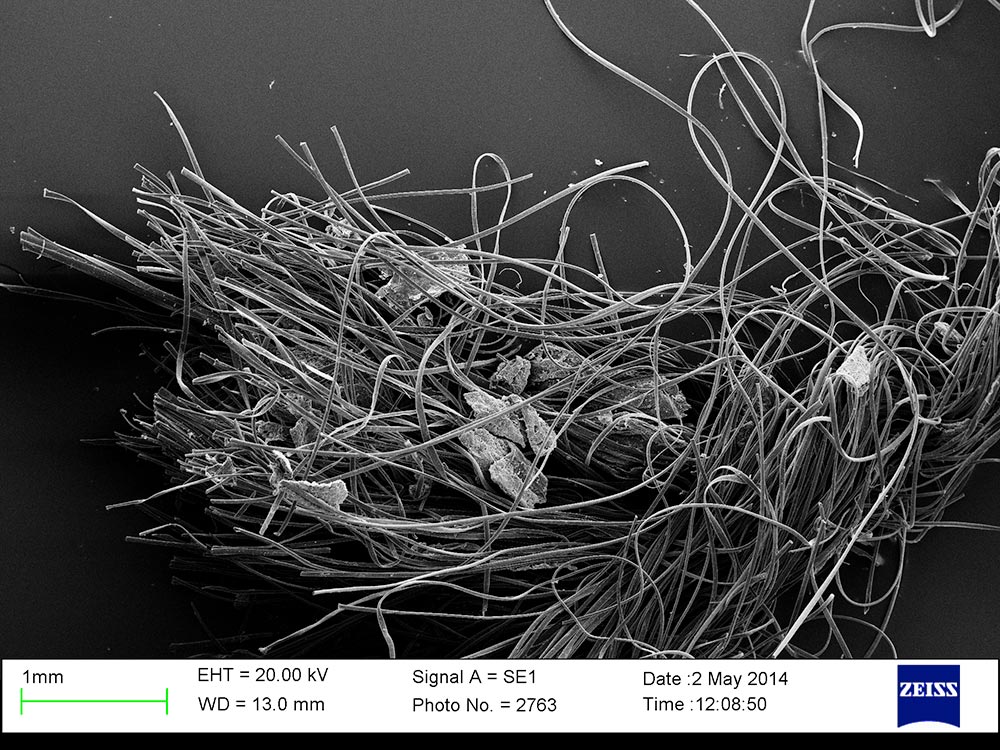 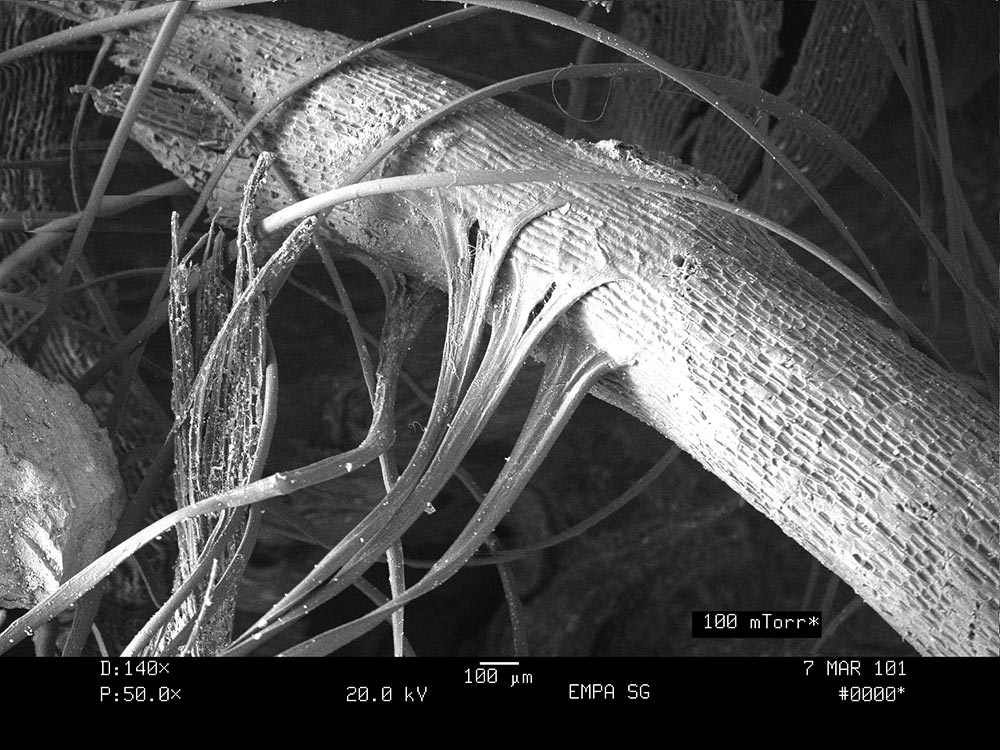 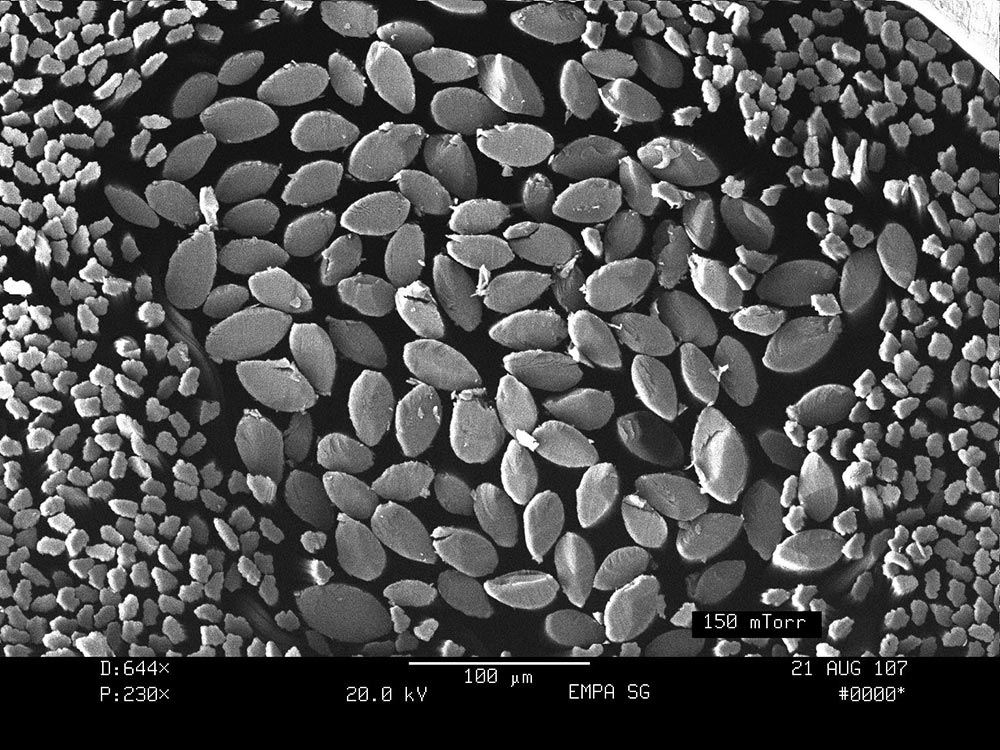 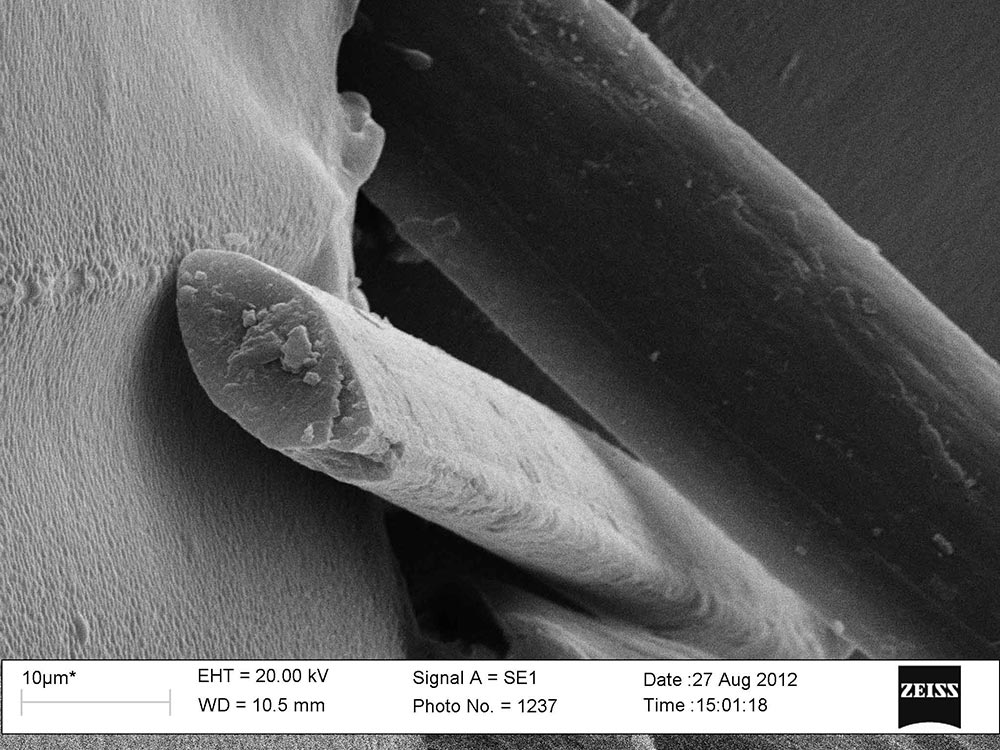 Cross-section of a single byssus fibre, SEM photograph A. Rast 2012

The cross-section of the byssus fibre is – in contrast to all other natural fibres – clearly elliptical or almond-shaped. It does not show any structure.

The fibre diameter varies within a single fibre. With 10-50 μm, it is in the range of other natural fibres, for instance mulberry silk or Egyptian linen with 11-15 μm, merino wool with 18-25 μm, cotton with 12-35 μm, mohair/alpaca with 20-40 μm. Linen fabrics with a yarn diameter of 50 μm and a diameter of the individual fibre of 11 μm are known from ancient times (Cook & El-Gamal 1990). This refutes the often-repeated claim that sea silk is much finer than the finest silks – “molto più fine delle sete più fini” (Zanetti 1964).

By means of infrared spectroscopy, sea silk cannot be distinguished from other silks or animal fibres since they have a similar chemical structure. The infrared spectrum shows the typical spectrum of proteins. All protein fibres, i.e., all animal fibres, show the same spectrum: the amino and hydroxy bands at 3300 cm-1, the CH vibrations at 2800cm-1 and the characteristic vibrations for the amide groups in proteins at 1650 cm-1. In the case of the latter, they clearly differ from the natural fibres made of cellulose, which do not have amide groups. Therefore, sea silk can unfortunately not be detected perfectly with simple and non-destructive infrared spectroscopy (IR), as all animal fibres show the same bands in the IR examination.

The significantly lower nitrogen content compared to other animal fibres is a characteristic feature for the identifying sea silk. However, this method requires about 150 mg of fibre material, which is unlikely to be an option for most objects to be examined.

In 2010, the tensile strength and elongation of byssus fibres of Pinna nobilis were investigated at EMPA St. Gallen. In the process, 20 individual fibres – 10 dry and 10 wetted with salt water – were torn. Beforehand, the fineness (titer) was determined; i.e., a precise length was taken and weighed. This allows the byssus fibres to be compared to other fibres. The results: Sea silk is enormously stretchable, especially when wet. The strength decreases by 47% when wet (which is always the case with protein fibres, but is particularly high here). The strength is low compared to other fibres, and it is even weaker than wool: sea silk 6.9 cN/tex (wool 10-20 cN/tex, silk 25- 50 cN/tex, cotton 30-40 cN/tex). Byssus fibres are not very regular (compared fibre to fibre).